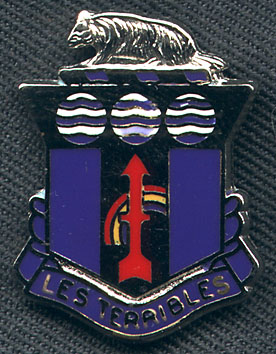 The following will describe the meaning of the many symbols incorporated into this insignia.

The badger on the top is a symbol of all the regiments of the Wisconsin (Badger State) National Guard.

The blue and gold wreath beneath the badger represents the fact that Wisconsin was one of the original states of French occupation.

The three white and blue circles (fountains of water) have several meanings. First, the name "Wisconsin" is an Indian word meaning "the gathering of the waters" or "wild, rushing waters" which is very representative of our state. Second, they are symbolic of the three Wisconsin  regiments - the First, Second and Third Wisconsin Infantry - from which elements were combined to make up the 127th Infantry, part of the 32nd Division in World War I. Third, they signify that this unit had fought in three wars by 1920.

The field of blue in the center of the Regimental Coat of Arms signifies that the 127th Regiment is Infantry and thus Infantry Blue must be prominently displayed.

The rainbow is representative of the 42nd "Rainbow" Division. While the Wisconsin National Guard was assembling at State camps, after being mobilized into Federal Service, in August of 1917, Companies E, F, and G (from Fond du Lac, Oshkosh and Appleton respectively) of the Second Wisconsin Infantry Regiment were, by orders of the War Department, transferred to the 42nd Division, National Guard, called the "Rainbow Division", and organized as the 150th Machine Gun Battalion, Companies A (formerly Co. G), B (formerly Co. E) and C (formerly Co. F), and  were sent to Camp Mills, Long Island, New York, for preliminary training before shipment to France.

The red arrow represents our role in the 32nd Infantry Division.

At the bottom of the Coat of Arms is the motto, or nom-de-guerre, "Les Terribles". For part of World War I the 32nd Division was under the orders of the 38th French Corps, commanded at that time by General de Mondesir. The French Commander was at the front observing the battle and saw the 32nd Division in action. General de Mondesir was so impressed with the dedication, determination and fighting skill displayed by the 32nd Division that he said, "Oui, Oui, Les soldats terrible, tres bien, tres bien!"  General Mangin heard of it and referred to the 32nd Division as "Les Terribles" when he asked for the Division to join his famous 10th French Army of shock troops north of  Soissons, and he later made it official when he incorporated the nickname in his citation for their terrific punch at Juvigny. Thus the motto "Les Terribles", which means "the terrible ones" was derived and has remained with the 32nd Infantry Division.

Check out the Wisconsin Military History page of this web site for more information about the history of the 32nd Division and the State of Wisconsin.

Back to B Troop Home Page