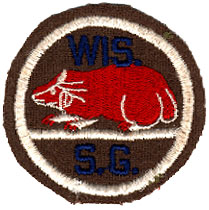 Here is some information about the Wisconsin State Guard when it was activated during World War I and World War II.

The Wisconsin State Guard During World War I

On 9 July 1917 an announcement from Madison stated that a State Guard would be organized to take the place of the Wisconsin National Guard after it left the State. The first units would be organized in Milwaukee, Oshkosh, Fond du Lac and Green Bay. Later, units would be recruited throughout the State. It was to be a purely volunteer organization, recruited mainly from men too young and too old for the military draft.

The Wisconsin National Guard left the State in August of 1917, bound for Camp MacArthur, near Waco, Texas for training and then deployment to France to fight in the World War.

The companies were paid an allowance by the state for armory rent and an additional allowance for the upkeep of clothing and for general expenses connected with their training. They were issued uniforms of a distinctive pattern, different from the uniforms of the Wisconsin National Guard and the U.S. Army. They were armed with arms issued to the state by the war department for this purpose.

Their attendance at the camp of instruction in July 1918, was evidence of their patriotism, for they served without pay. The camp was commanded by BG Charles King, Wisconsin National Guard, retired, and that officer put the men through the paces of the regular army life. Because of their natural training in life the men proved apt students of military tactics, and their appearance after a few days of intensive training, following their own instructions at home, was everything to be desired. In his report to the adjutant general Gen. King paid them a highly deserved compliment.

All of the men had enlisted with the understanding that enlistment in the State Guard did not exempt them from the draft. They were, as had been said, of the age above and below the first draft restrictions (21-30 years). Many of them later were called to active service when the men reaching twenty-one were enrolled, and later the remaining men were registered under the draft for ages up to 40 years. The men of the State Guard who were later called went into the service with preliminary training which must have been valuable.

The State Reserve companies were organized in the cities from a further reserve force, and they paid their own expenses of administration and purchased their own uniforms.

The Wisconsin State Guard was called out 3 times during the World War I time period.

On 1 Feb. 1941, after the Wisconsin National Guard was federalized in October of 1940, the Governor (Julius P. Heil) directed the Adjutant General (MG Ralph M. Immell) to organize a state guard of 2,400 men to consist of a brigade of 3 infantry regiments with 32 rifle companies, 3 headquarters and service companies, and 3 bands, plus one MP Company and one Machine Gun Company. Each regiment consited of 3 battalions of 4 companies each. By 30 June 1941, the organization was complete. Each company had 5 officers and 60 enlisted men. Uniforms were furnished by the state and rifles and ammunition by the federal government. Their uniforms were similar to, but distinctive from, the uniforms of the Regular Army. They were given an intensive course in home defense.

During their existence, the Wisconsin State Guard was called by the Governor on the following occasions.

Back to Wisconsin Military History